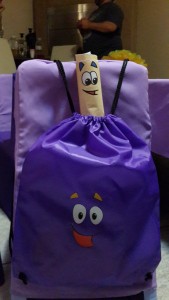 Sidenote:It must be said again, as to how much I still cry into my post-toasties about not having had a pro photog at this party. I put in so much effort into everything- so bright and vibrant, and yet all I have to show are a few blurry phone camera shots. Ones I took when I remembered or had the chance to. I honestly am so hands-on at all these kiddy parties that Im busy all the time, and I think my buds know by now that I’ll only get to chance to chat once all the games are done.  So, what Im trying to say is, forgive the blurry shots.

So, in our house, we only seem to have Dora the explorer fans – despite her constant shouting, and the awkward silences that often follow her constant questioning, as she stairs you down. But seriously, though, our girls are major-league fans of her’s – I think its her adventurous spirit, can-do attitude, the new fun new language and singing that seals it for them. (Seriously, my girls are having the odd convo’s in Spanish now, and its just the cutest thing!) So, it was no surprise then that Morgan-Lee had a Dora the explorer fiesta for her third birthday party last year. (see all the colourful fun & free templates here, or check out the rainbow cake and Estrella cookies here.)

As part of the party packs, I had made these Backpacks for each kid, to shove all their other loot in and take home. However, not only were they used as just cute little carriers, they were also used as part of the party games we had.

I mean, what’s a Dora party without a little bit of an adventure, right?!

Party Games:
By the way, this was all suppose happen outdoors, however, thanks to the South Easter pumping it that very day, we decided to have it all indoors. Twas a bit of a squish, and chaotic, but still fun!

So after the birthday song was sang and the kids got settled to snack, we were about to get into the Pinata, when good ol’ Swiper (my nephew) did his thang, and came to swipe the piñata. (poor little donkey)

In “shock and horror”, I called them all to action- to help us find the Pinata! They grabbed their backpacks and with the help of their parent/s they got to it. Each kid was kitted out with a map.

In order to find the piñata, they first had to cross Troll Bridge, then find each of the Estrallas’ twin in the Funky Forest, and then go into Swiper’s house.

So, the troll bridge was essentially those rubber puzzle mats, with a picture of the grumpy old Troll infront of it. But the bridge had holes in it that they had to fix before they could cross- that is, fit in the missing puzzle piece. Each backpack had a puzzle piece inside of it. So each explorer had to find their matching piece. 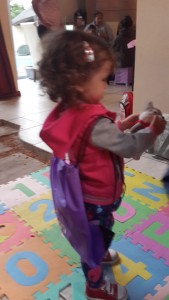 Once they crossed the bridge, off into the forest they went (our indoor garden, with all the different stars were pasted up). Here each of them had three different estrellas (stars) in their backpack for which they had to “catch” (find) the matching Estrella in the garden and place in their backpack/starpocket.

Thereafter they were off to Swiper’s home (our garage), however to enter they first had to help Swiper get his tail back on. Which was essentially just pin the tail on the Swiper version of pin the tial on the donkey.
Once all the kids did their thang, they found the piñata in the garage….and then the next game started:
Pinata Bashing!

Dude, I saw some serious samurai skills that day! My niece in particular- dah-ham! Clearly she’s been watching her dad real close! 

Like I said, a bit crazy busy indoors, and was totally swarmed by kiddies asking for the next step – which I totally love, and actually thrive on! Thats SO my love language! Mike, however, *giggle* I saw him start to fade, and noticed the panic in his eyes, as the sea of kids (there were 26) start to surround him and bombard him with questions. Maybe Im cruel for laughing at it, but I could see him start to shut down..and thats when I called over to him like, “BABY!!! Look at me, just look at me! Don’t look down. You need to go do xyz..” He’s clearly still getting used the big family effect.

All in, tight-squeeze aside, it was quite fun, with a lot of the moms telling me how cool the scavenger hunt and it’s props all were. Pats on the back for a party? I’ll take ’em! 🙂 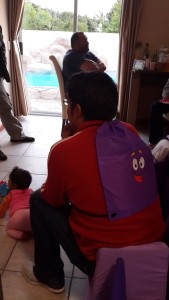 But now, the making of these little backpacks..lets get to that.
First up, I bought these plain purple backpacks in bulk from a company Bagazio. They normally only work with companies as they only do bulk, but I managed to convince a the kind sales lady to accept a slightly smaller bulk version of the purchase. Their service was fast, friendly and reliable – definitely a thumbs up from me.
Now, even though these babies took a bit out of me to make, I was pretty pleased with the way they turned out. And by take it out of me, I really do mean take it out of me, especially since I had 26 kids to cater for!
I was trying to find the fastest method of creating Backpack’s face, so I tried painting, using fabric paint. Whilst pretty effective, it took far too long. See here… 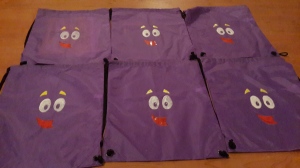 So, eventually, what I thought would be the most time consuming (cutting out the face and pasting it) actually worked out to the quickest and easiest method of recreating backpack’s face. 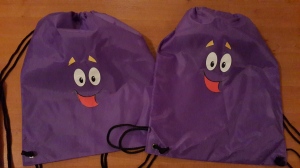 However, if you want to use the painting method, simply use this template here below, place it inside the bag and trace it using dressmakers pencil.

Then simply use fabric paint to colour in the tracing (red for tongue, white for eyes and mouth and black for outlines). 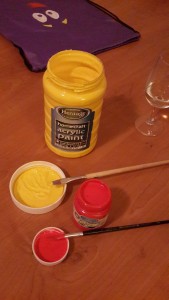 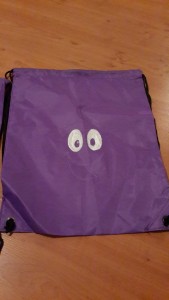 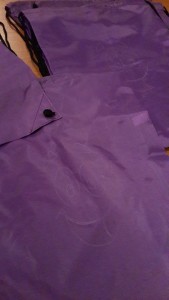 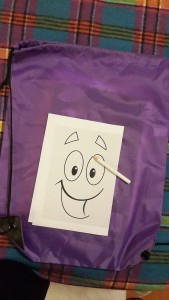 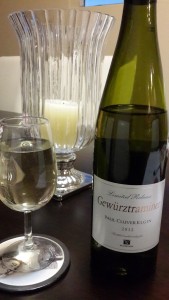 However, may I recommend that you if you DO go with particular type of wine, rather go with Simonsig Gewurtsraminer (excellent with sushi, on it’s own, or whatever, its just great.)

Now then, if you haven’t had too much of your little Gewurtzy, you could try the cut and paste method, for which I recommend you using this template here:
backpack face to paste 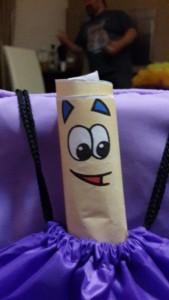 But for the final touches, you’d still need the Map, cause, he’s like, you know….”The Maaaaap”. Besides, those two go hand in hand. See this post for that link to the map template I used. The rest of the pix on the actual map, I kind of drew and cut and paste, because I kind of made up the course the night before, once I confirmed with the weather gods that it was indeed going to be crappy skies.

It has to mentioned, though, that the map was so well received, and especially so by the birthday girl, that it was used in play the next day, and for a few weeks thereafter as well. 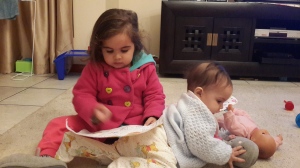 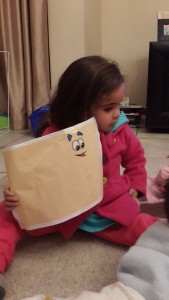 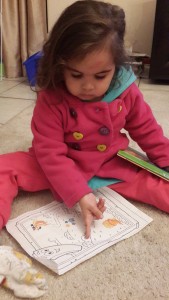 Oh, and jusst to give you an idea as what their entire party pack entailed, aside from the Backpack and Map, I made mini paper backpacks, using purple paper bags (MerryPak), and pasted this face on there. (Judging from the photo alone, the colours may seem like they don’t match, however, in real life, it did. So choose your paperbag coour well, or feel free to recolour this template here below.)

It’s the same one as the painted version, except I was suicidal enough to go and colour it in…bit, by painful bit…using Paint. (see why the wine helps?!) So I’ve saved you from some mind-numbing work- My pleasure! (I do accept payment in chocolate and cookies, in case you were wondering.) 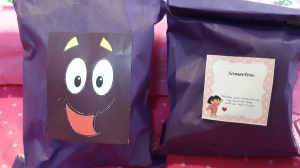 As mentioned before, Im not a huge fan of jamming kids with sugar, so I tend to limit it somewhat. This time not so much, but still limited and I filled them up with:

-Niknaks
-Lollipops
-Mini Chomp
-Home-made play dough in a plastic container (MerryPack) that I Dora-fied with a cupcake topper. Read this post for that cupcake topper link)
-A cookie cutter for dough

I loved this party so much,and by the looks of little sister showing the same interest I may just be revisiting this party theme again one day! Who knows.

And there you go, that’s all there is to it to creating Dora’s Backpack and map! Happy creating! X

« Mastitis: My personal slice of breastfeeding hell and how to remedy it
Easy-peasy Home-made SLIME recipe »

One thought on “How to make your own Dora the Explorer Backpack, some fun party game ideas & FREE templates”

Flatten the curve. Do the right thing. STAY HOME. 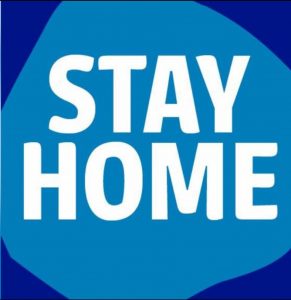 Flatten the curve. Do the right thing and STAY HOME.